Skip to content
The commission was set up shortly after the Second Vatican Council, and is the oldest continuous commission in the country.

The commission meets six times a year and much of the work of the commission is done by the subgroups.  We currently have 4 subgroups, which meet frequently throughout the year.

The commission is a member of the National Justice and Peace Network (NJPN), and is part of the Liverpool Archdiocese’s Pastoral Formation Department. 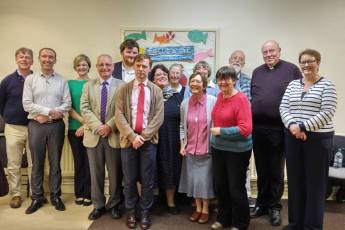 Why a Justice and Peace Commission?

When the Gospel says: ‘Blessed are you who are poor … who are hungry … who are weeping’. (Lk 6:20-21) it does not mean that poverty is a good thing in itself. Poverty is not training in humility, in moral virtue. The poor are not blessed because they lead lives of designer simplicity or moral superiority. Poverty is about malnutrition, infant mortality, living in disgusting conditions, freezing to death in a cardboard box. Poverty is not edifying.

‘Blessed are you who are poor’ means that God is to be found amongst the poor; that God is on their side. The gutter is a good place from which to recognise God. It removes the illusion of self-sufficiency.

Economic injustice is the second most prominent theme in the whole of Scripture – the first being idolatry, which is itself often linked with the love of money. Mary speaks of God as bringing down the mighty from their thrones and lifting up the lowly, of filling the hungry with good things and sending the rich away with nothing. (Lk 1:52-3) Jesus continues where his mother left off: “I come to bring good news to the poor, freedom to the captive, sight to the blind.” (Lk 4:18)

The J&P Commission was set up in Liverpool in the wake of the Second Vatican Council’s restatement of the truth that salvation involves practical things; liberation from the bondage of slavery and debt, freedom from the pangs of hunger, release from the captivity of poverty and entry into the promised land of freedom and prosperity. More than 10 years ago the Archbishop renewed our commitment by signing, and displaying on the walls of the cathedral, a preferential option for the poor.

The J&P Commission exists to keep this vision alive within the diocese, in a time when many no longer see a material dimension to God’s purpose for humanity, when we are increasingly tempted to think of religion as some sort of self-help therapy, all about our mental and spiritual well being, a mere lifestyle choice. We are called to be the antidote to that introverted piety that is locked into a private relationship with God and has no thought of looking sideways at those who live next door.

Christianity is the most materialistic of the world’s religions faiths. For us, God is imagined as a human being, born in a shed, and at one with the physical reality of human life. With Christianity, God is to be found in the dirt and not in the sky.

That is why the J&P Commission must joyfully face the sometimes grim realities of everyday life.